Smartphones change people’s habits and make people enjoy the convenience of touch solutions. Winstar‘s vision is to devote itself to the human-machine interaction interface and communication technology innovation.

Difference between RTP with CTP touch

There is a uniform, transparent conductive layer (ITO) on one side of the SCTP and an electrode connecting to the controller on the four corners. The SCTP controller IC provides charging to make the ITO layer generate a uniform electric field. When a finger touches the panel, four-side of electrodes will create a current flowing to the contacts. The current intensity is proportional to the distance between the finger and the electrode. In the meantime, the IC detects the current value and calculates the XY coordinates of the contact point accordingly.

Schematic of SCTP principle and structure

Projected capacitive touch (PCTP) is divided into self-capacitance and mutual-capacitance.

Self-capacitance (PCTP) is a crossed (ITO) electrode array on the glass’s surface. One side of the electrode is grounded, and the other side is connected to the driving circuit to form a capacitor loop. When a finger touches a self-capacitance panel, it will increase the panel capacitance. The touch IC will scan and detect the crossed electrode arrays’ capacitance and determine the X-axis and Y-axis coordinates according to the Status change in capacitance before and after the touch.

The advantage is that the scanning speed is fast and only needs to scan the electrode number of X-axis and Y-axis in one cycle.

However, there are some disadvantages:

Therefore, the coupling between the two electrodes near the touchpoint will change when the finger touches the mutual capacitance panel resulting in decrease mend of the capacitance in the area. The touch IC will calculate each touch coordinate according to the data change of capacitance from the second dimension on the touch panel.

Therefore, mutual capacitance can accurately calculate each touch point’s coordinates even if multiple touchpoints exist. The advantages are no calibration needed, no “ghost point” effect, no “drift” phenomenon, and the actual multi-touch function is realized.

Schematic of PCTP principle and structure: 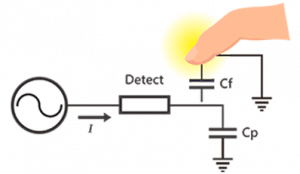 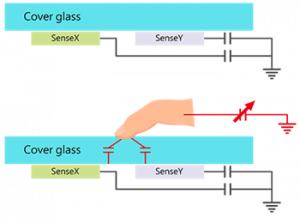 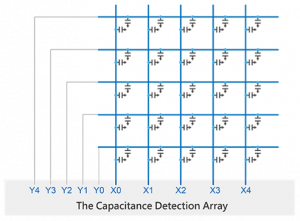 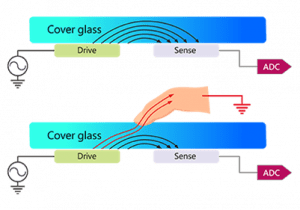 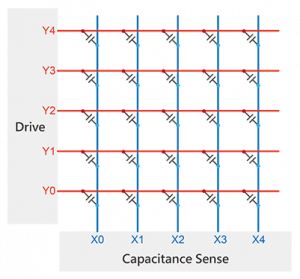 In 2019, the COVID-19 pandemic spread out globally. Large-scale of infections lead to illness and deaths; Viruses mutate nowadays. More and more ferocious and highly infectious virus strains have been discovered continuously, such as Alpha, Beta, Gamma, Delta, Omicron, etc. In addition, to develop new vaccines and drugs actively, the isolation of infection channels is also an important measure. The vision of Winstar is to dedicate itself to the innovation of human-machine interaction interfaces and actively develop technologies and products to satisfy the market and customer’s needs.

There are so many advantages of developing multi-touch and hover touch. Take Winstar model WF70A8 as an example (see first picture):

Posted on 14 June 202215 September 2022 by Nijkerk Electronics
Categories: News, Winstar Display
Tags: ctp, Hover touch, RTP, Winstar
We use cookies on our website to give you the most relevant experience by remembering your preferences and repeat visits. By clicking “Accept All”, you consent to the use of ALL the cookies. However, you may visit "Cookie Settings" to provide a controlled consent.
Cookie SettingsAccept All.
privacy policy
Manage consent