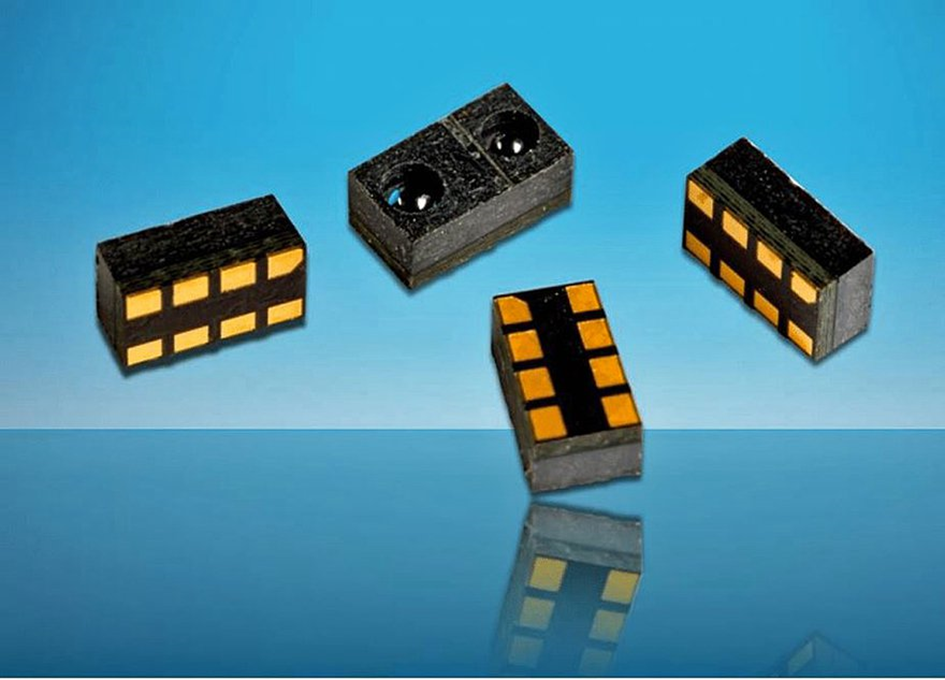 (Feature Story in All About Circuits)

As Komarov puts it, “this is something we’ve developed that is somewhat unique in the marketplace. This is a programmable reflective sensor that is very miniature. It’s got a reflective sensor, LED, and photosensor integrated on it with a lot of signal conditioning electronics, including a digital-to-analog converter, a Manchester interface, etc. It’s got programmability capabilities.”

An interesting note is the role of temperature in the operability of these components: “It’s got temperature sensing so it senses the temperature of the environment and compensates for that. It adjusts the LED drive and output based on temperature variation, which is very important for portable applications where you go in and out, maybe in home healthcare equipment. It’s also low power, which is also important for portability so it doesn’t drain batteries.”

Aimed at industrial and medical applications, the sensor features a 25k+ ambient light immunity that allows operation from dark rooms to bright sunlight. It can detect many types of media with as little as a 30% change in reflectivity, and it has a 6μs response time.

This reflective optical sensor integrated automatic temperature compensation maximizes detection consistency and reliability. The OPB9000 is factory calibrated at a 12 mm distance, and it can be re-calibrated in milliseconds with a single command with an on-chip EEPROM.

The unit’s targeted applications include:

Komarov calls the OPB9000 “best in class” for its type.

One of the issues that optical devices come up against is interference from light, but Komarov asserts that this particular sensor is designed to “completely” filter ambient light out.

“It’s got excellent ambient immunity up to 25,000W, which is basically full sunlight… so you just receive the signal.”

And how do they achieve this filtering?

“The LED light is pulsed so it can filter out continuous light and only pick up the light that’s sent by the LED. Because it’s pulsed, it will know the frequency at which it’s pulsed—and everything else, it doesn’t matter how bright, the component will ignore that.”

Dev Kit and a (Future) Dev Board

TT has a kit ready for those who’d like to give the sensor a try “We developed this kit specifically for engineers to try out and see the programmability feature. It comes with a USB stick with a GUI on it that they can install on their computer… They can plug and see how it works by testing it against different sources [suited to their application], whatever the need is. They can program this to detect, for example, water flowing. By default, it may not detect this, but you can program it [to do so].”

In addition, the company plans to release a dev PCB in the next month.

“So far, we’ve been selling this sensor by itself but now we’ve created a PCB that basically integrates all of the passives on it and has a connector.” He says that this is intended for those who would like to use this sensor, adapt it, and use it in production.

According to Komarov, the OPF350 is basically the equivalent of TT’s OPF370A product: “Last year was a supply chain bottleneck for many companies—long lead times,” says Komarov. “So we went out and basically created a product that was equivalent to something we had but it can be delivered in 10-weeks’ lead time.”

Komarov adds that customers who have been working with the OPF370A can easily switch to the OPF350A, which is offered in a TO-18 package. “There’s a little bit of variation,” he says. “[Customers] will have to keep in mind when coupling it with fiber with a diameter other than 50/125 μm. It might have a variation in terms of output power.” He went on to clarify that these variations should not be significant enough to cause issues for typical applications. “There’s no signal loss and actually coupling into wider fiber, generally you want to have better coupling and more power because losses happen in the fiber, especially during transitions. So it’s actually somewhat of a benefit. Other than that, it’s a drop-in replacement [for the OPF370A].”

Likely product classes for these fiber optic transmitters will include:

It is best suited for telecom and data-communication applications at up to 35 MHz and also applications that require high thermal stability in industrial settings for the temperature range of -40°C to 100°C. It’s also designed to work with optical power with fibers that measure between 50/125µm up to 200/300µm.

The OPF350A. Image from TT Electronics

The OPF352A is a fiber optic transmitter, available in the ST-style receptacle. “The benefit of getting it in the ST connector is that it’s already mounted in there,” says Komarov, “but it’s also been tested with the fiber cable already inserted into the connector to ensure all of the alignment, etc. is appropriate so you don’t have any losses. This allows great optical coupling with the fiber.”

According to TT, this component is suitable for PCB or panel mounting with an operating temperature range of -40° C to +85° C.

The OPF352A. Image from TT Electronics

Posted on 21 August 201918 November 2021 by Nijkerk Electronics
Category: News
Tags: Fiber Optic Transmitters, Reflective Optical Sensor, TT Electronics
We use cookies on our website to give you the most relevant experience by remembering your preferences and repeat visits. By clicking “Accept All”, you consent to the use of ALL the cookies. However, you may visit "Cookie Settings" to provide a controlled consent.
Cookie SettingsAccept All.
privacy policy
Manage consent